pvDesign's cabling topology aims to reduce the total cable length inside the PV plant. This article explains how this goal is achieved.

In pvDesign, modules are connected in series following a leapfrog configuration as shown in the image below. This connection allows the positive and negative cables to have the same length, which reduces the total length of the string cables.

Note:  The length shown in the BOQ that pvDesign generates considers both the positive and negative cables.

String definition and positioning within a structure 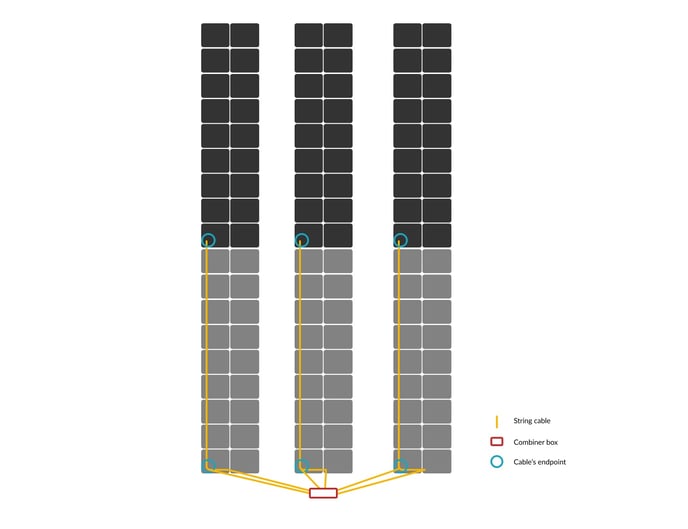 Before placing the combiner box or string inverters, pvDesign determines which structures share combiner box/string inverters. Within that group of structures, the software analyses which structure is positioned best to reduce the length of used string wire (i.e. the structure that is positioned in the centre of the structure group). If there is more than one at the same distance from the centre of the group, the one closest to the power station is chosen.

The groups of structures that are close to each other are subsequently re-evaluated to see whether the string boxes for both groups of structures can be positioned such that the cables are also aligned. If there is indeed a structure in position to decrease the cable length, the box (and inherently the cable) is relocated to follow a nearby trench. Once the optimal structure is chosen, the string box is located at the edge of the structure that is most centred with respect to its cluster. 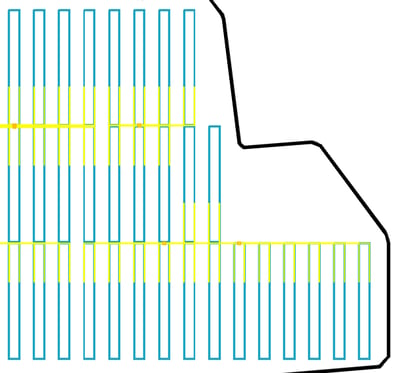 The DC harness configuration collects strings from the same table, a constraint to this grouping however is that the harness over the number of strings per table should be integer result.

For example, if there are six strings per table (2V) connected in pitch grouping you can collect them in four different ways:

For the above example (six strings per table (2V)) if we change to "Axial grouping" the six strings/harness (having in total 1 harness/structure) option would not be available, as a single straight cable is not able to collect all the strings, we would need at least two harnesses.

pvDesign offers the option for DC bus system configuration. This setup enables the user to define the number of string cables or harness (from different tables) which are connected to one point at the DC bus for the corresponding power station.

pvDesign's algorithm locates the power stations at the centre of their corresponding block of structures with the objective of minimizing the length of the low voltage (LV) cables. 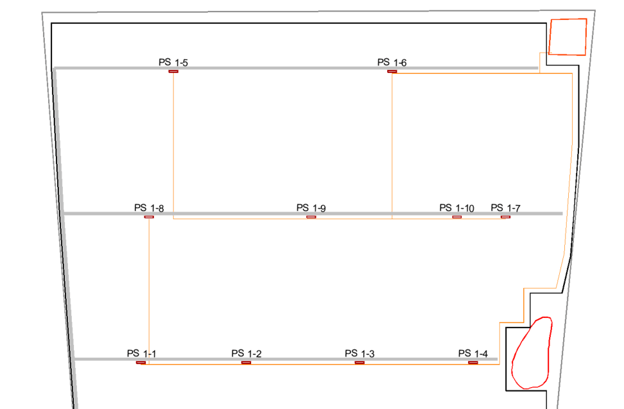 The software automatically connects power stations together based on their capacity and proximity. Each MV cable will collect a power station until the total load current of that line reaches 630A.

The LV trenches will drive the LV cables from the combiner boxes/string inverters to the power stations. These may vary depending on the chosen road layout.

In the case of horizontal roads, the LV trenches will first be installed horizontally following the edges of the structures and then vertically to reach the power stations (below trackers), which can be seen in the image below. 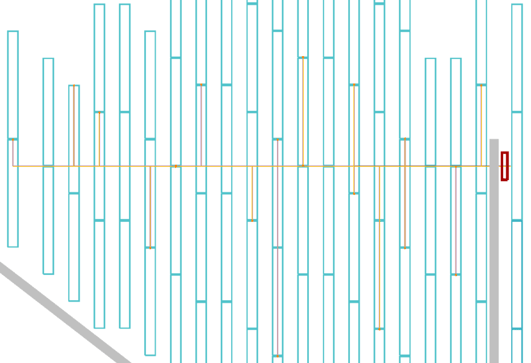 Power stations are connected together through MV trenches. These are usually installed following the roads. If the power stations are separated by the DC field, the MV trenching will cross the field without crossing or going below the structures.

In conclusion, pvDesign's algorithm tends to group the structures in a way that minimizes the cables' length. This objective results in connecting and placing the electrical elements in the way mentioned above.