How to create shortcuts in a site

Learn what shortcuts are, what they are for, and how to create them.

Do you want to connect different parts of the same area via a road? Do you want to improve your PV plant's accessibility by adding secondary roads that connect to primary ones?
With shortcuts, you are able to do so easily.

This article aims to explain how you can define road shortcuts and show you some examples in practice.

A shortcut is a user-defined road segment that can be added to the road layout. These segments are useful to connect (via road) different parts of the same area (imagine a restricted area between the two of them) or even adjacent roads. With Shortcuts, users can influence the road definition algorithm, re-routing individual roads to their taste.

In the image below, we can see that there is a restricted area marked in red. pvDesign generates a perimeter road that goes around it. But what if, in this specific case, we want the road to go right through this RA, following the perimeter. 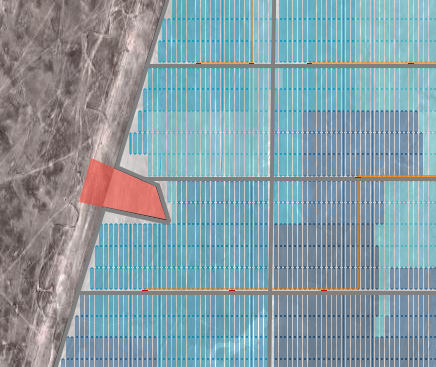 By drawing a shortcut, we can see how pvDesign traces a road right through the red restricted area rather than going all the way around it. 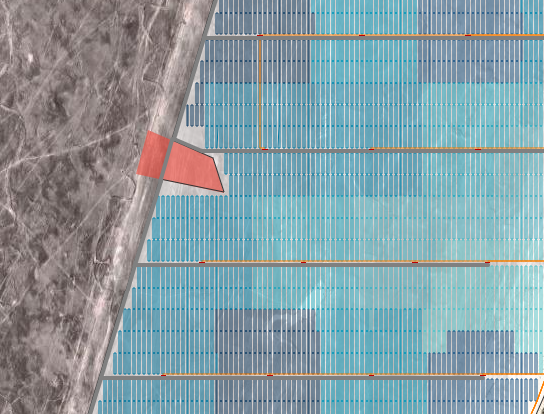 In this case, the difference may not seem that big of a deal. But, if the restricted area is larger... 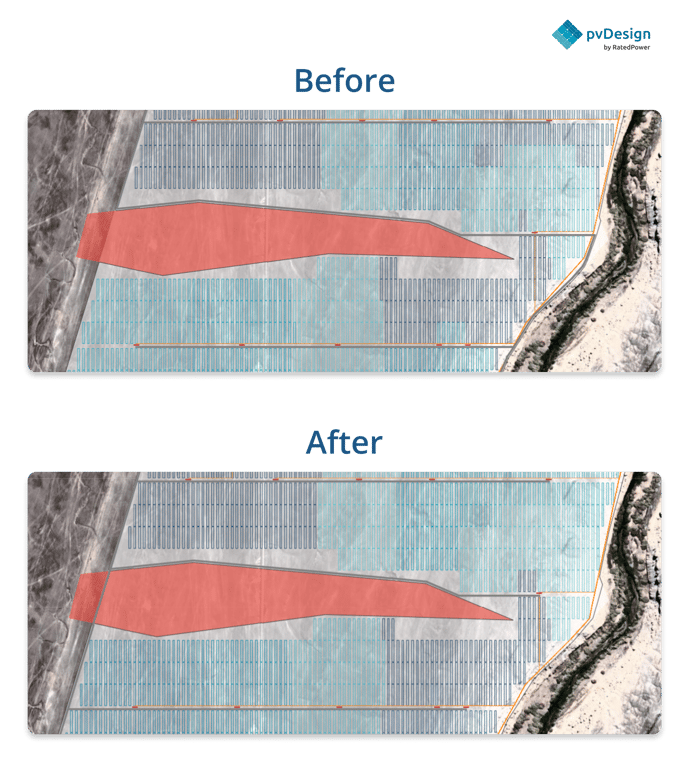 In the above example, if instead Horizontal and Perimeter roads were selected in the layout configuration this shortcut wouldn't be accepted by pvDesign. Why?
The Restricted Area (RA) would be surrounded by a perimeter road, therefore is the perimeter road that connects opposing segments of a road.
Automatically, pvDesign will understand that this shortcut is unnecessary because the option horizontal and perimeter roads, in this particular instance, render a shortcut useless

Next, another example of shortcuts is when we're not satisfied with the placement of the roads crossing the RAs and we place two segments on an alternative placement.

Contrary to the previous image, in this particular instance by using the vertical and perimeter roads configuration, it is possible to use this shortcut. The Restricted Area (RA) would have a perimeter road surrounding it, but it does not unite separate segments. Therefore, pvDesign would accept the use of this shortcut.

Conclusion: It is highly recommended not to use shortcuts connecting the separated structures of the same block when the "Perimeter and Horizontal Roads" or "Perimeter and Vertical Roads" configurations are enabled. 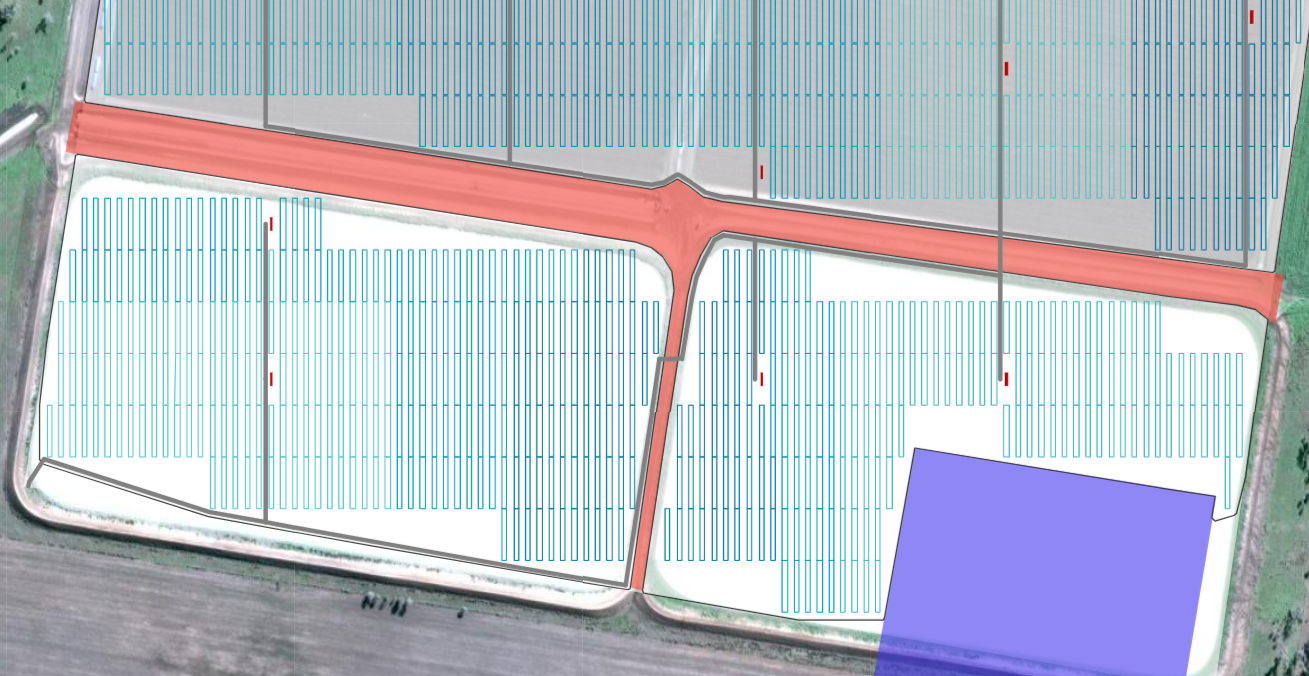 In the next example, we can see that our road is crossing the restricted area instead of going through the small corridor between the two RAs.

By creating a shortcut that goes along the edge of the first RA, we can force the road to go through that corridor, leaving the RA off-limits. 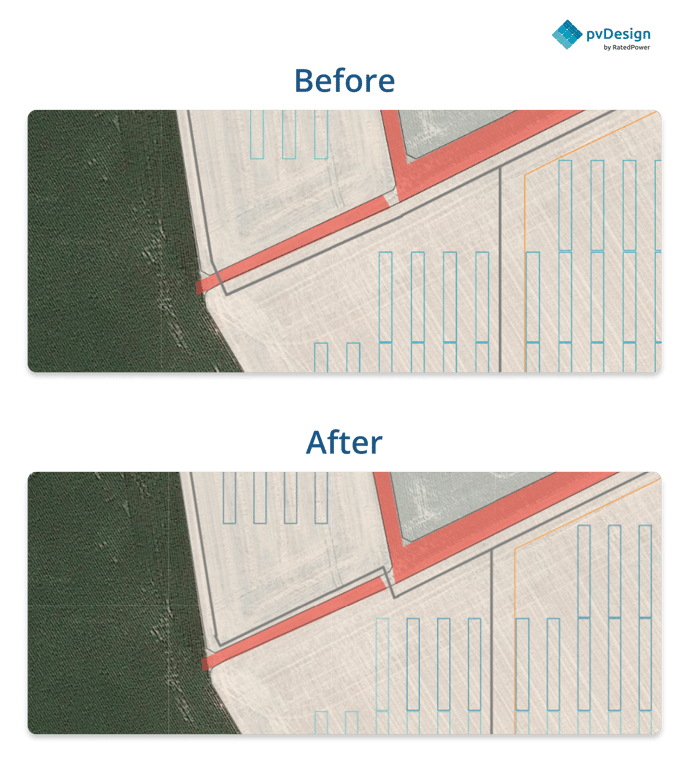 Shortcuts can help us change the layout of the roads, opting for more convenient (or shorter) alternatives.

Although the shortcuts feature has not been developed with the fishbone topology in mind, we have seen that the tool is fully functional in the following two case scenarios:

Essentially, you will draw a path (go to the next section to learn how) crossing your AA. This path will become the fishbone of your road layout, from where other roads will branch out.

Let's take the site below as an example. We opted for trackers and horizontal roads. pvDesign needs to connect these roads together somehow in order to reach the road access. It does so by tracing a perimeter road on the left side. 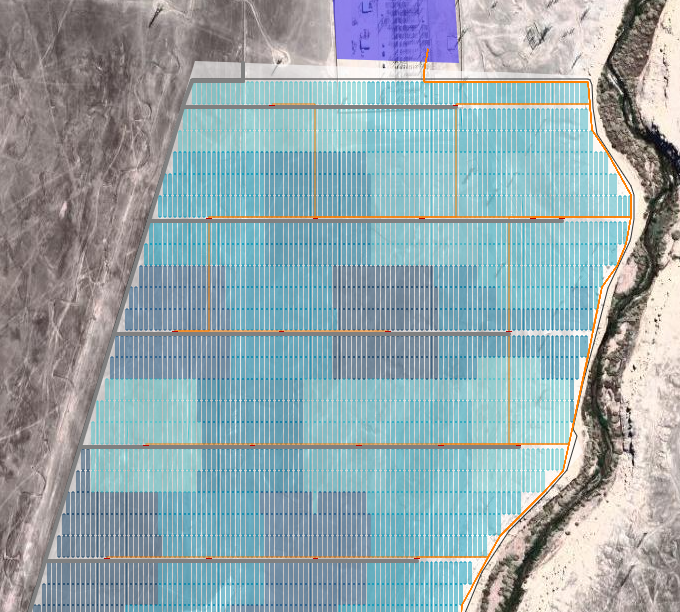 What if we want to connect these horizontal roads in a different way, one that reaches the access point in a shorter and more direct path? With Shortcuts, this is quite easy to do.

In the image below, we have defined a vertical shortcut. Now, there's no need for a perimeter road, so the software removes it and connects the horizontal roads using the user-defined path. 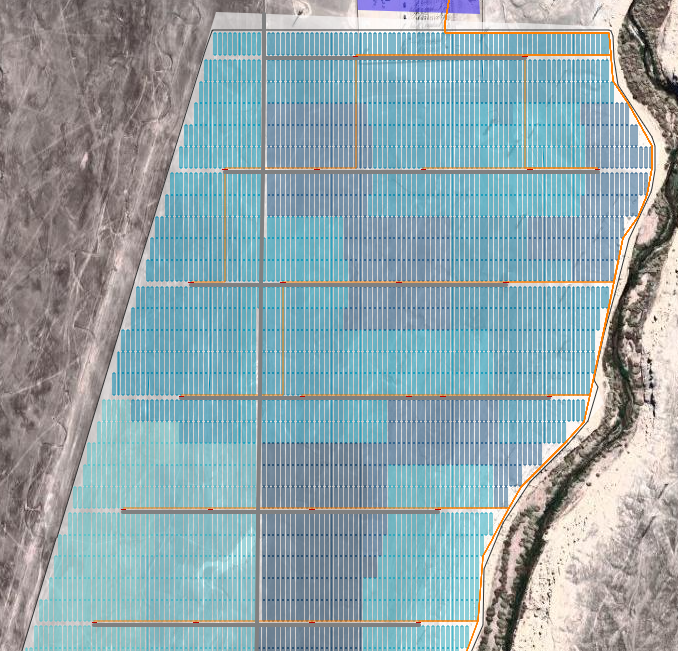 This specific application of shortcuts is still a work in progress. If you have any feedback or examples you'd like to share with us, please do. We're all ears!

There are some special cases and conditions applied to the use of this tool.

In other words, a shortcut must serve as a link between roads. Any excess road (extra segment) must be longer than 10 meters to be conserved.

How to create shortcuts

There's two ways that you can create shortcuts. One would be to do it on google earth and upload the file to pvDesign. And the other would be to create it using the site creator inside the software.

After getting into the site creator interface (as per the article on how to create a site directly inside pvDesign), you will be able to select the "Path" box, and choose shortcuts.

After having defined your site's KML/KMZ file as per the article on how to create a site, you can opt to create optional road shortcuts. To do so, follow the next steps:

Right-click on the folder and go to: Add → Folder

3. Inside the "Shortcuts" folder, you can define as many road shortcuts as you want. To do so, you must use the path tool. You can name these shortcuts whatever you want.

Right-click on the "Shortcuts" folder and go to: Add → Path

4. The final step is to save the whole folder (in other words the main folder) as a KML or a KMZ.

5. We can now upload the KML or KMZ file to pvDesign. Done!