How to decrease your PV plant's unused peak power

When working in pvDesign, it might occur that some of the structures of your design are highlighted in red. The explanation found in the legend is that the structures are “uninstalled due to an incompatible electrical configuration”. Generating your design with incompatible red structures results in unoccupied space on your site, which subsequently leads to a lesser amount of peak power.

At the layout tab, you can select the type of capacity configuration your PV plant will follow. To minimize the number of red structures, select maximum capacity and pvDesign will no longer limit the capacity you can set.

With maximum capacity selected, the software will try to install as many structures as possible. The number of modules per inverter impacts the DC/AC ratio, the simulation is however still limited to the DC/AC ratio set. Allowing this ratio to be slightly different to the one defined (the DC/AC ratio will vary up to +/- 0,15) can resolve small numbers of leftover red structures. If you are flexible in terms of the DC/AC ratio, please try selecting the “Install the maximum peak power” checkbox to resolve this issue.

When you have selected maximum capacity and allow the DC/AC ratio to be somewhat flexible, it is still possible to have structures not installed due to the electrical configuration. This is related to the inverter power selected and can be solved in a couple of ways.

When using central inverters, the number of structures connected to one inverter operates within a certain range.

Choosing a central inverter that has much higher or lower power than the originally decided upon inverter power is not always desired. The selection of a secondary central inverter might then be the perfect solution for your design. 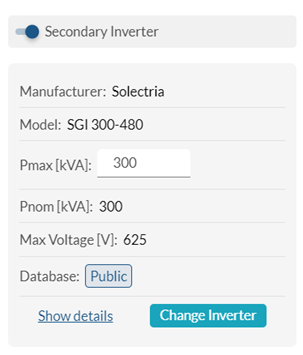 A secondary inverter allows pvDesign to transfer the DC power into AC at two different maximum powers. This creates the option to have a large inverter for your larger groups of structures, and a smaller one for the smaller clusters.

If there are no inverters in the database small enough to convert the DC power from your structure block into AC output, you can select string inverters. Subsequently, string inverters are then configured for your entire plant.

Alternatively, if one single AA polygon is defined and this separation between plots is created using restricted areas, a single power station can be connected to structures of different areas. This method ensures better coverage of the land and fewer red structures will be generated in your design.

If you are still not capable of getting rid of the red structures or are having issues in implementing any of the other steps: feel free to contact us.